LRFD for Substructures – Concept of Failure and Reliability Index

Editor’s Note: Naresh is the employer of Randy Post, the owner and editor of GeoPrac.net.

In a previous article (NCS, 2007), the concept of limit state in the framework of Load and Resistance Factor Design (LRFD) as adopted by American Association of State Highway and Transportation Officials (AASHTO) was discussed.  A limit state was defined as a condition beyond which the bridge or component ceases to satisfy the provisions for which it was designed.  Once a limit state is exceeded, a failure is considered to occur from the perspective of the criterion or criteria for which the design was performed.

The word â€œfailureâ€ connotes an unacceptable difference between expected and observed performance (Leonards, 1982).  The simplest manifestation of a failure may be in the form of cracking of an engineered component or structure during its design life.  Other manifestations may include loss of intended serviceability, excessive maintenance costs, economic losses, collapse and/or loss of life.  Since the design for the case of absolutely no failure is theoretically impossible within the context of stochastic processes and design for a very small probability of failure will be very expensive, a certain acceptable probability of failure, Pf, needs to be defined.  Thus, from practical considerations, an acceptable risk level should be determined for each limit state, i.e., the probability that a failure can occur.  In the AASHTO-LRFD framework (AASHTO, 2007), this is achieved by defining a reliability index, β (also referred to as safety index)  The use of the term â€œreliability index,â€ has an important psychological advantage, i.e., it avoids the negative connotation of the word â€œfailure.â€  This article discusses the concept of failure and reliability index.  Readers interested in a primer on LRFD are referred to NCS (2006). 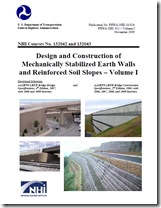 The much anticipated LRFD update to the MSE Wall and Reinforced Soil Slope Manual is now available for download from the FHWA’s website. The full title of the document is Design of Mechanically Stabilized Earth Walls and Reinforced Soil Slopes and it was authored by Ryan R. Berg, P.E.; Barry R. Christopher, Ph.D., P.E. and Naresh C. Samtani, Ph.D., P.E. Find the abstract and download link below. As time permits, I’ll try to post more about some of the changes in this important geotechnical publication.

AASHTO Materials and Lab Specs in Print No More

March 30, 2017 rockman Available Resources Comments Off on AASHTO Materials and Lab Specs in Print No More

Maybe I missed this when it first happened, but I recently saw that AASHTO’s Standard Specifications for Transportation Materials and Methods of Sampling and Testing is no longer being offered as a printed book but […]

April 7-11 is National Workzone Awareness Week (NWZAW) which draws attention to the hazards roadway construction crews face from motorists not heeding safety warnings. For 2006â€”the last year for which data is availableâ€”more than 1,000 died in work zones. Figures for 2007 will be released by the National Work Zone Safety Information Clearinghouse later this year. Motorists are also at risk for not following work zone safety precautions. They may face damage to their vehicles, injuries, and loss of life. For 2006, 614 motorists died in work zone crashes. (Graphic by Caltrans)

Below are a few items to think about the next time youâ€™re driving through a workzone taken from a Caltrans fact sheet. More after the break (sorry for the â€œDuhâ€ ones, but I didnâ€™t write them). As someone who occasionally works on the road and knows many more people who do, please, please remember to slow down!