As reported in a previous post, Utah has been considering adopting model legislation for local municipalities to make it more difficult for developers to develop in landslide prone areas. Apparently the Geologic Hazards working group is preparing to issue their recommendations. From Utah’s Daily Herald:

A final set of recommendations for regulating development in areas at risk for landslides is expected to be adopted next week.

The Geologic Hazards Working Group is scheduled to meet at 9 a.m. Wednesday in Room 112 at the Department of Natural Resources building, 1594 W. North Temple in Salt Lake City. Gov. Jon Huntsman Jr. formed the group after landslides damaged houses, including some in Utah County, in 2005 and 2006. 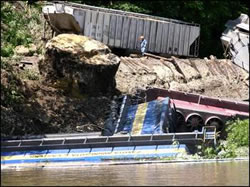