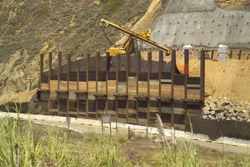 Tunnel boring will progress from south to north using the New Austrian Tunneling Method. Both tunnels will be bored at the same time, one tunnel face approximately 60 yards ahead of the other. The work schedule is 24 hours a day, 7 days a week resulting in a 24-month timetable to break through to the north portal. Estimated cost for the tunnels is between $180 and $200 million.

The project is separated into 6 separate contracts. At the southern end, there was an 85,000 cubic yard rock cut and soil nail retaining wall. That project was completed by Gordon N. Ball in June of 2006. I couldn’t find 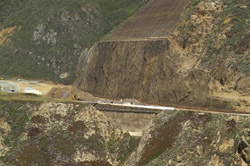 mention of the dimensions for the wall, but it did say there were 1200 soil nails, 30-ft long…thats a lot of nails! They appear to have spent a fair amount of money on architectural shotcrete as well, it looks nice. 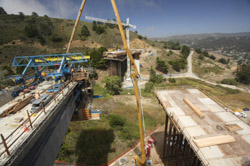 At the northern end of the project there are twin bridges that connect the north portals of the tunnels back with the PCH. This work is currently under way by Disney Construction with an expected completion date of Summer 2008.

The tunnel contract was awarded to Kiewit Pacific. The tunnels are expected to open for traffic in the Winter of 2010 with the project being completed in summer 2011.

Geology and History of the Landslide

This video is from shortly after the 2006 closure of the PCH due to Rockfall when Grant Wilcox, a senior engineering geologist with Caltrans gave a presentation at a Midcoast Community Council meeting  regarding the previous failure events, especially the 1995 event. There is a short commercial for something in the first 20 seconds or so.

This news story aired a few weeks back.  It has some great views of the tunneling process but also focuses on some of the social issues, such as complaints about Rats, as well as noise […]