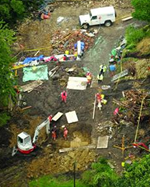 A geotechnical company in the UK has been charged with manslaughter after the death of a geologist on September 5, 2008 according to the UK publication, the New Civil Engineer.  This is believed to be the first charges brought up under the British Parliament’s “Corporate Manslaughter and Corporate Homicide Act 2007”. The geologist was killed when the walls of a test pit collapsed while he was collecting samples during a site survey.  The Director of the firm faces charges as well that could include jail time if found guilty. More details about the charges can be found at Personneltoday.com as well as a description of the law. A 2008 press release from the Gloucestershire Constabulary shares some recollections of the victim’s family and friends. My heart truly goes out to the family and loved ones of the victim, it sounds like he was a wonderful person.   (Photo credit: SWNS via New Civil Engineer) 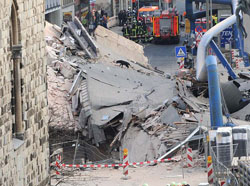