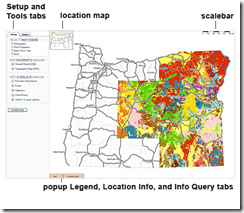 At the end of last month, the Oregon Department of Geology and Mineral Industries (DOGAMI) issued this press release describing their new online interface for their statewide digital geologic map. The online version only covers the eastern portion of the state at the present time. But the interface is not too shabby with the ability to view conventional stratigraphy information, rock properties layers or general rock type. Available overlays include faults, highways, formation boundaries, cities/towns and USGS quad grids. You can also add a shaded relief map or topographic map base map or combine them both. And a feature I wish was more common in some of these online interfaces, they have the ability to export images when you get the view you want. It appears that you can do it at resolutions up to 1200 ppi.

According to James Miller of GeoEngineers, Inc., the most significant recent technological advances in geotechnical engineering are LiDAR, GIS-based data management, and advanced analysis of soil-structure interaction. Read his article at DJC.com. Thanks to iCivilEngineer […] 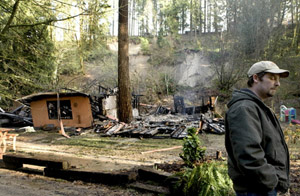 This is definitely the season for landslides, mudslides, debris flows and other mayhem in Oregon and elsewhere in the pacific northwest. It seems like every time I turn around there is another Google Alert in my inbox about a landslide related issue in that area. Having a hard time keeping up with it all, I decided to try something new. Click through to see a map of automatically updated landslide news in Oregon. Lets call it a Beta…so we’ll see if it works out. If it does, maybe I’ll try something similar for other areas or other items that tend to make it into the news. (Photo by Ross William Hamilton/The Oregonian)