ShanghaiDaily.com reports that authorities have been closely monitoring adjacent buildings and floodwalls for signs of distress and have taken samples of building materials such as concrete and rebar for laboratory testing. 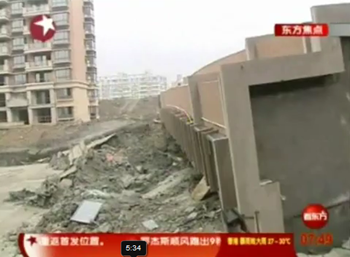 ChinaDaily.com is already citing construction problems as the cause of the collapse. They reference a report from the investigative team that reportedly says the contractor had excavated a large area for a parking garage on one side of the building, and piled around 10-m of soil on the other side. From that description it sounds like the surcharge load from the fill caused a rotational or bearing capacity type failure that brought down the building, which would explain why the building appeared to topple away from the excavation. (Image from this video on YouTube, shown below also)

In this article, ShanghaiDaily.com says that the material from the garage excavation was dumped in a landfill area 30-m from the building. In the same article, they report that authorities have placed 9 people including staff from the developer and contractor “under control” and have reassured residents and investors that their money is safe.

The development was a part of a 10-building complex of apartment buildings that appeared to be nearing completion. 489 of the 629 units had already been sold. 70% of people who had invested in apartments in the other buildings have asked for their money back in light of the failure. They are only 5 subway stops away from downtown Shanghai and were highly sought by commuters.

If you speak Chinese, I bet you will find this video much more interesting. But the imagery and illustrations tell part of the story better than the other video, even without the audio. I just put it on mute. Scroll down for some screen captures from the video. 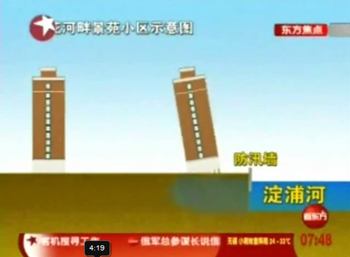 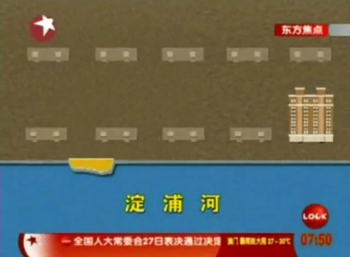 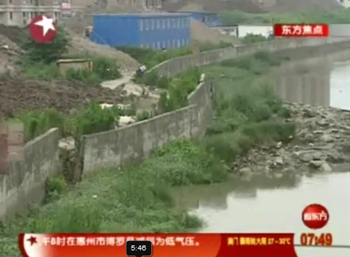 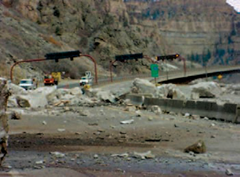 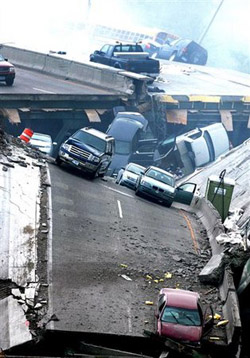