Storage for How Long?

New changes to the rules that nuclear facilities must follow with regards to temporary storage of their nuclear waste are clearly needed. According to Bloomberg.com (hat tip to Harold of the Ontariogeofish blog), in October of 2008, members of the nuclear regulatory commission proposed amending the rules to allow for storage of spent fuel on-site for a period of up to 60-years after a reactor ceases operation. Storage on the order of 100-years is probably quite realistic.

Gregory Jaczko, the chairman of the nuclear regulatory commission was quoted in the Bloomberg article with some dismissive remarks about concerns for temporary storage of nuclear waste. Incidentally, Jaczko is a former aide to Nevada Senator Harry Reid who was largely responsible for killing the Yucca Mountain project.

“Certainly, in the short term it’s not an urgent problem,” Jaczko, 38, said in the interview yesterday at the agency’s headquarters in Rockville, Maryland. “It is an issue we need to be aware of and be diligent about, but it’s not a crisis by any means.”

“Probably 100 years” is a short time frame for storing fuel, Jaczko said. “Changes aren’t likely to happen significantly in that period of time with the fuel.”

There are currently 120 sites in 39 states that are temporarily storing spent nuclear fuel. I like how Harold at Ontariogeofish frequently refers to these storage containers as "Obama Barrels" and he describes them as rusting away down by the river. Nice visual! But could this be a reality? I don’t know what standards these containers were designed for or what their design life is. If they were assuming that by 2025 the waste would be transferred to Yucca Mountain, will the containers still be sound in another 100 years? What about potential national security concerns related to attacks on these numerous and spread out sites? Or having to transport a container to a permanent site in 100 years when the container might not be in as pristine of a condition as when it was first stored.

I guess my point is that we can’t sit around and do nothing. We must follow the lead of several other countries like Sweden and Finland and find a suitable geologic repository for the nuclear waste to address these concerns regarding safety and security of temporary storage and to make sure that nuclear power remains an option in the mix of power generation methods needed to meet our power needs in this country.

Another often overlooked consequence of not having a permanent geologic repository for the nuclear waste is the legal and financial obligation that the US Government has through the USDOE. According to Power Engineering, under the Nuclear Waste Policy Act of 1985, the USDOE:

There have been hundreds of millions of dollars in lawsuits settled by the USDOE with nuclear power companies over this issue. The article cited above references sources that estimate a total liability for the USDOE of at least $7 billion on this issue. And that number may be out of date.

The Need for Nuclear Power in the Future

The issue of nuclear power plants is a highly politicized one. There seems to be much opposition to their use and with the current uncertainties regarding permanent storage of waste, who knows how that will affect the building of new plants in the future. But I think people’s perceptions of nuclear power plants are of Chernobyl, Three Mile Island, and Homer J. Simpson. Those just aren’t the realities, and I think people owe it to themselves to be a little more open minded. (Simpsons image © FOX and Matt Groening)

Now I’m all for green energy and reducing fossil fuel dependence and green house gas emissions, but to me, it doesn’t look like the numbers will work out for a completely renewable/green solution to the US’s energy/pollution problems, certainly not overnight. The biggest problem is economy, those green energy sources just aren’t as economical yet on the kind of scale you need to totally replace Coal and Nuclear. Another problem is apparent when you consider how people actually use electricity. The figure below shows some general usage curves for both winter and summer. Note how the peak demand fluctuates with the time of day. 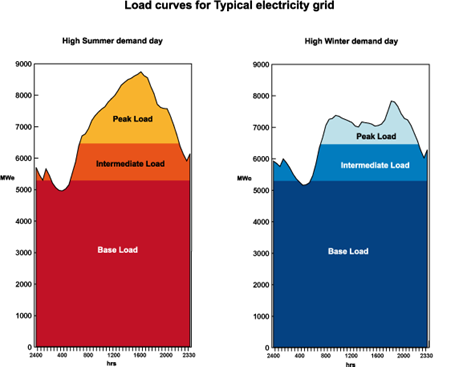 Solar energy is pretty good for intermediate and peak generation because during the day (sunshine!) is usually when your peak occurs. I know they have some options for storage, and the solar-thermal (heating oil in pipes using parabolic mirrors) setups can overcome some of the daytime limitations of photovoltaic (PV as in your stereotypical solar panels).

Wind can be sporadic, so if you rely on it too much, you could come up short during your peak load times. Geothermal is great, if you’re near a potential source, but it’s probably not going to contribute much when you look at it on a national level. Other peak and intermediate sources include hydro (letting more water through at those times), natural gas fired plants that can come online and offline relatively quickly, and perhaps some biomass power plants. But most of the above-mentioned green energy sources won’t be reliable base load contributors.

Nuclear fits well into the base load part of the equation. Right now, I suspect that the majority of the US’ base load comes from Coal or Natural Gas. Some undoubtedly comes from hydroelectric and nuclear also. Nobody is probably going to be building any new large scale hydro projects any time soon for environmental reasons. With current and forthcoming restrictions on carbon emissions, alternatives to coal will need to be found. Well, nuclear is one such alternative and aside from that pesky nuclear waste problem, it is very environmentally friendly (that’s steam, not smoke people).

Personally I wouldn’t mind seeing more nuclear power plants in this country. But regardless of what happens with new plants, the storage of spent nuclear fuel will be a problem that won’t go away, a permanent geologic repository needs to happen somewhere.

As the U.S. continues to fight over hurdles for its Yucca Mountain Nuclear Waste repository, Finland is on track to become the first country with a permanent storage facility for spent fuel rods from nuclear reactors. Their Onkalo tunnel, on the western coast of Finland will eventually stretch for 5-km (2-miles) and reach a depth of 500-m (1,600-ft) in solid granite bedrock. Once at depth a grid of horizontal tunnels will be constructed. Vertical storage holes will be excavated in these horizontal shafts, and the spent rods, encased in steel cannisters with copper corrosion protection, will be placed on layers of bentonite clay. The clay will cushion the cannisters and protect them against long term geologic movement. The clay also serves as a barrier to water, swelling in its presence to seal off any cracks or conduits for water that could potentially transport nuclear contamination in the distant future if the primary measures of protection are compromised. The tunnels will eventually be backfilled with bentonite and rock. The facility is projected to open in approximately 15 years at a cost of about 3 billion euros. The projected life of the facility is through 2100.  Links after the break. (Illustration by BBC) 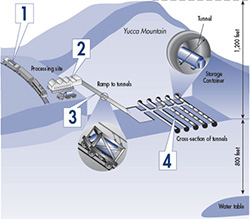 The Center for Yucca Facts has presented a letter to the chairman of the Spending and Government Efficiency Commission (SAGE) of the State of Nevada recommending that an objective look at the proposed Yucca Mountain Nuclear Waste Repository might show that it provides a solution to Nevada’s budgetary dilemmas. More after the break.