At this point, it is still unclear what caused the slide of approximately one million cubic meters (1.31 million cy) of soil. There were no reports of cracking or settlement of soils in the vicinity prior to the failure. The landslide caused a massive wake on the Concordia Lake, which flooded the surrounding shores and flushed boats onto the banks. The lake is a result of brown coal surface mining operations and was generated in 1991. Currently, Concordia Lake covers approximately 350 Hectares (865 acres) and is up to 30 meters (100 ft) deep. 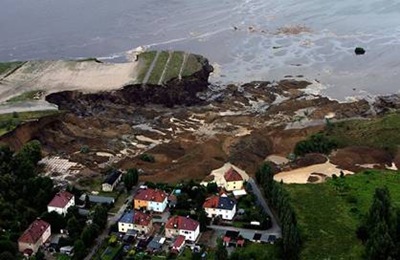 Authorities are still investigating in all directions and are still debating whether the slide is related to the brown coal mining operations. The affected village was built in the 1930s on fills deposited during surface mining. Brown coal was mined in the area between 1865 and 1990. Since it is still unclear whether or not additional failures will happen, the police fenced off a large area around the scarp.

The slide also increased the water level on the lake by approximately 60 centimeters (2 ft). This increase covered dozens of measurement gages which were used to monitor the stability of banks around the lake. The impact on bank stability around the lake will have to be assessed in the upcoming weeks and months.

[Editor] Thanks for the post Wolfgang. I also found information on this landslide at Dave’s Landslide Blog. From reading an update by Dr. Dave and some Tweets, it sounds as if officials have given up on finding the three missing people alive. [/Editor] 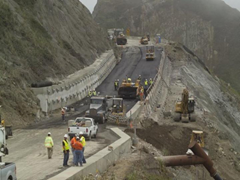 China has been getting pounded recently by heavy rains and flooding. Here are a few stories I’ve come across in this department. Three Gorges Dam flooding turns deadly; dozens missing in China – Source: CSMonitor.com […]