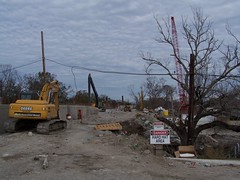 In four separate contracts, up to $331 million in levee reconstruction projects were awarded last week by the USACE to rebuild levees in some of the hardest hit areas from Hurricane Katrina, including St. Bernard Parish. Once contract in the neighborhood of $500K for preconstruction work could end up being worth $281M during construction if the USACE is satisfied with the joint venture’s preliminary engineering work and awards them the construction option. (Photo by djeo)

Other contracts include a $33M project to Tetra Tech EC, Inc. to rebuild gates and floodwalls along Lake Ponchartrain and at least two other projects of $10M and $6.6M. These awards come on the heels of a $775K preconstruction contract awarded last month to a JV that could end up being worth $357M in construction costs. For those counting, that’s nearly $700M in projects in the last month. More info from the New Orleans Times-Picayune. Scoop credit to Geology.com.

June 11, 2012 rockman General Comments Off on Kokosing Construction To Build ARES® Retaining Walls for One of Ohio’s Largest Highway Projects