Boulder, CO, USA – Some time soon, a powerful earthquake will trigger a massive tsunami that will flood the Pacific Northwest, destroying homes and threatening the lives of tens of thousands of people, says Yumei Wang, a geotechnical engineer at the Oregon Department of Geology and Mineral Industries in Portland.

The region’s geology makes an earthquake-triggered tsunami inevitable and imminent in geologic time, Wang says, yet coastal towns and cities in the northwest are woefully unprepared for such a large-scale natural disaster. In response, she is working with public officials and stakeholders to develop a series of tsunami evacuation buildings up and down the northwest coast. They would be the first buildings of their kind in the United States. And construction, she urges, can’t start soon enough.

"Unless we do this, we will have lots of people dying in a tsunami," Wang says. "That’s not how we want our people to die."

Wang will present recommendations in a session titled, Risks and Realities: Current Advances in Understanding Societal Risk and Resilience to Natural Hazards, at this month’s Annual Meeting of the Geological Society of America in Portland, Oregon.

A line of volcanoes from northern California to British Columbia marks the eastern edge of a fault system (called the Cascadia subduction zone), where one plate is wedged under another. Those plates shift like geological clockwork every few hundred years, producing earthquakes that shake the region. The last major quake along the Cascadia subduction zone occurred on January 26, 1700. It produced a tsunami that damaged coastal towns as far away as Japan.

The region’s next big earthquake could happen any day now, Wang says, or it might not happen for several hundred years. When the day comes, a tsunami—with inundation heights of 50 feet or more—could hit the northwest coast within 10 to 20 minutes.

The standard emergency response in cases like these is to move people inland and uphill, but there are plenty of communities where people simply won’t be able to evacuate in time, Wang says. The resort town of Seaside, Ore., for example, is low-lying with inadequate roads and bridges. Kids and the elderly are particularly vulnerable.

In Cannon Beach, Ore., Wang has started meeting with officials to hold serious discussions on constructing the first tsunami evacuation building in the U.S. The building, a proposed rebuilding of the town’s existing city hall, would have to be made of reinforced concrete with a deep foundation and strong columns, a post-tensioning structural system to keep it upright, an 18-foot tall first floor, and wave-dissipation structures in front and back, among many other design details.

Tsunami evacuation buildings won’t be cheap. Wang estimates that the one in Cannon Beach would have an added cost of between $1 million and $2 million. But the building would provide a safe space that people could reach quickly and be ready for emergency response and long term recovery. Getting just one such building off the ground, Wang said, is a critical first step towards creating a network of buildings that will help save many thousands of lives.

Pile Dynamics Inc. is a global leader in deep foundation quality control and performance testing.  They are known for their specialty geotechnical software and equipment, including Pile Driving Analyzer (PDA), and thermal integrity profiler (TIP).  […] 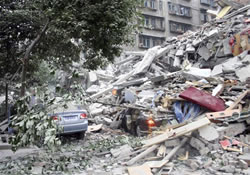