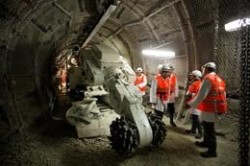 Apparently the French are working on their nuclear waste storage facility, they already have a research laboratory constructed about 1/2-km underground. The actual repository will come on line around 2025 and be one of the first to be put into service (only Sweden and Finland likely ahead), and one of the largest planned. The host rock is some kind of limestone layer. [Source: Ontario-geofish. Image: B. Tinoco/ANDRA by way of Nature.com]

Although they are nearly at the final depth, the work thus far has been primarily to construct the 4-km long access tunnel. The facility is not scheduled to accept the nuclear waste until 2020 but […]

After the 2011 Fukushima earthquake, the reactors at TEPCO’s nuclear facility began leaking radioactive groundwater. The plan to contain the contamination is to use ground freezing to construct an "ice wall" to cutoff the flow. […]