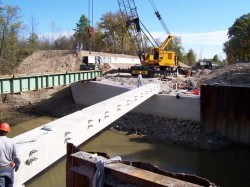 New York’s St. Lawrence County DOT has attracted the attention of the FHWA…in a good way. The agency has built 5 Geosynthetic Reinforced Soil (GRS) bridge abutments since last fall, and the sixth will be the subject of a Florida film crew hired by the FHWA. The footage will be shown at various meetings leading up the the creation of a new technical manual on the building of GRS bridge structures which are a cheap and rapidly constructible solution to crumbling bridges in these difficult economic times. [Source: Watertown Daily Times via Geosynthetica.net News. Image: FHWA]

There are two notable geotechnical engineers among the recipients of the 2016 ASCE Opal Outstanding Projects and Leaders awards. Rudolph Bonaparte, Ph.D., P.E., D.GE, F.ASCE, NAE, the president and CEO of Geosyntec, will receive the […]

The photo of this failed SPL wall is pretty remarkable. It was discussed in a thread I came accross on EngTips.com. The originator of the thread (kleo) says he was involved from the contractor side […]