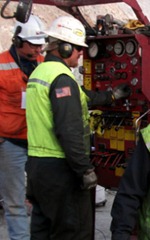 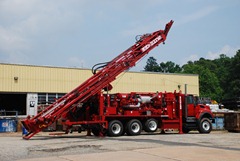 Before Hart and his crew ever got to the site, the initial borehole that located the miners and provided a conduit for food, water, supplies and communication was drilled by a Schramm 685 rig.  That occurred 17 days after the miners were initially trapped.  Three plans were derived by the Chilean government to provide the best chance for rescue, referred to as Plans A through C.  Initial estimates were that the rescue would take until Christmas, but Hart and crew beat that mark by over 2 months!

The rock was an abrasive and very hard quartzite.  Plans A and C were utilizing conventional rock coring techniques to drill the holes.  But despite some initial reservations by the Chilean government, Fisher and others convinced them that Center Rock’s down-hole hammer bits on the Schramm T130 drill rig would work for this job. They first drilled the 2,040-ft with a 5-in hole, then reamed it to 12-in, and finally to 26-in diameter, large enough to fit the Phoenix rescue capsule. 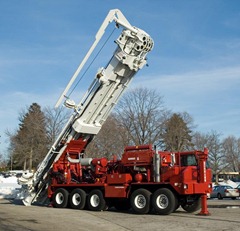 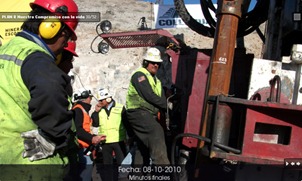 Once that jubilant breakthrough moment occurred, the stress was lifted from the drilling crew, they had gotten their job done.  Before the Schramm T130 moved off the hole, the shaft was inspected by video camera.  Based on the inspection, Mining Minister Laurence Golborne decided to reinforce less than 315-ft of the top of the shaft with steel casing.  He defended his decision, saying it was purely technical and based on the input from a team of eight geologists and mining engineers.

After 33 days, the Layne/Geotec/Schramm/Center Rock team had reached the 33 trapped miners.  Several days later, the Schramm rig demobed from the site, but in a fashion that is quite unusual in the drilling profession.  Jeff Hart and the rest of the crew were essentially paraded out in front of the drill rig, surrounded by police and grateful family members of the miners.  Hart and crew didn’t stick around at the site, but moved out of the way to let other teams complete the rescue.  They flew to the Santiago office of Layne/Geotec where they watched the rescue.

After a long time away from his family, Jeff Hart returned to Denver to a hero’s welcome, including his 3 sisters wearing t-shirts with the slogan “Got Hart?” on the front.  Hart seems like a pretty humble guy, and I found a quote from one of his interviews with American media over the phone from Santiago that I think sums it up pretty well:

Links and Sources for Chile Mine Rescue

The geotechnical drilling business is not an easy one to enter, just ask Michael Cox of PalmettoINSITU in Charleston, South Carolina.  He recently celebrated two years in business and sat down with National Driller magazine […] 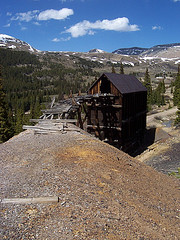 Local Leadville, Colorado officials are very concerned about a backup of heavy metal impregnated water that is backing up behind a 2.1 mile partially collapsed drainage tunnel. The volume of water is approximately 1 billion gallons or enough to fill 1,500 Oympic-sized swimming pools.Officials are very concerned about the potential for a catastrophic collapse. Source: CNN. (Photo by foto3116)

This post was removed at the request of the victim’s family. Please see a subsequent apology.