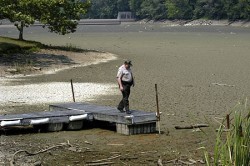 In July of 2005, cracks began forming in the concrete dam that created Duke Lake in Ryerson Station State Park in Pennsylvania that required officials to drain the 62-acre lake. The state’s Department of Environmental Protection has demanded that the company operating an underground coal mine at the location of the dam pay over $21M in damages. The state’s report ruled out other possible causes of cracks concluding that the only feasible cause was the longwall mining which took place during that time. Engineering firm Gannett Fleming Inc. is currently working on designs for replacement of the structure, no word on which company performed the report blaming the mining. [Source: www.observer-reporter.com via Association of State Dam Safety Officials. Image: Post-Gazette]

China: Three Gorges Dam’s image showing some cracks – Source: latimes.com via ASCE SmartBrief After the serious flooding in China this summer, Chinese officials have downgraded the design flood that they expect the dam to […]