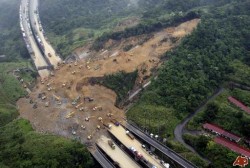 A panel of experts in civil engineering and geotechnical engineering has completed their investigation into the failure of the slope above Freeway No. 3 in Taiwan last April that killed 4 people. Their forensic geotechnical investigations concluded that the dip slope was already marginally stable. But they noted that they found corroded steel ground anchors that were part of the retaining system meant to restrain the slope. They conjecture that even though the contractor followed the relevant standards at the time of constructions, somehow voids formed around the cable during the grouting process and made the cable susceptible to corrosion.

Also noteworthy is that as a result of this failure, Taiwan’s National Freeway Bureau has changed standards for grouting ground anchors. They also conducted a comprehensive survey of all slopes along freeways and identified 32 slopes that were placed on a priority list for monitoring and inspection and 17 were found to need some form of mitigation. [Source: Taipei Times. Image: Sulekha.com]

Geo-Institute of the ASCE

June 23, 2017 rockman Links, Resources Comments Off on Geo-Institute of the ASCE

The Geo-Institute (G-I) is a specialty organization focused on the geo-industry. Created by the American Society of Civil Engineers in October 1996, our 10,400+ members and 44 member organizations now include scientists, engineers, technologists, and […]

Most geotechs are familiar with the Journal of Geotechnical and Geoenvironmental Engineering (JGGE), one of the (if not the) premier journal in the industry. It’s published by the ASCE’s Geo-Institute (G-I) and accounts for about 20% of the revenue of the G-I organization.

The G-I’s President, Dr. Jean-Louis Briaud, convened a task force in early 2009 to investigate if the JGGE is “adequately serving as a venue for practice oriented papers.” According to the final report from the Proposed "Journal of Geotechnical Engineering Practice" Task Force, the reason for the task force is that:

All answers from AllExperts.com by my colleague Robert Cummings, P.E. of Saguaro GeoServices, LLC of Tucson. He’s an expert in geological engineering, rock blasting and geotechnical engineering. I was impressed to see he has over […]