Needing to accurately identify the location of the voids and weak soils, URETEK utilized a ground penetrating radar system. As a quality control measure, URETEK also used a dynamic cone penetrometer to confirm the findings and establish the depth of the problem. A visual can be seen (see picture to the right) of actual soil seepage into one of the 12’ diameter pipes that caused the sinkholes. The assessment of the situation indicated 17,000 square feet of the parking lot required stabilization and/or sealing of underground joints.

After gathering all possible data collected by URETEK and the GPR contractor, a solution was designed and approved by the customer. URETEK first sealed 26 separated joints identified in the detention basin system. Many joints required sealing the entire circumference of the joint. URETEK used small, 5/8 inch injection holes drilled from the inside of the pipe to the soil surrounding pipe to deploy the patented, moisture resistive , structural grade polymer. The polymer, which has an expansion ratio of 20:1.0, effectively sealed the pipe while also stabilizing the eroding soil around the pipe (see below). Secondly, URETEK stabilized the base soils beneath the parking lot using a grid pattern for injection.

The injection probes used were placed 3.5’ into the soil to inject the weak strata shown by the GPR unit. This effectively increased the load bearing capacity of the soil to support customer traffic and delivery trucks. The total project was completed in six days with three of those days dedicated to surface work. Downtime was kept to a minimum and the customer was very pleased with the results which included a fully functional underground drainage system. URETEK was ultimately chosen as the ideal solution due to the minimal disruption to customer traffic, the speed at which the solution could be implemented, and the cost effectiveness of the overall solution.

Mr. Ty Taylor is the Vice President of Marketing at Uretek ICR, which specializes in concrete lifting and soil stabilization in the industrial, commercial and residential markets with their patened Polymer technology. 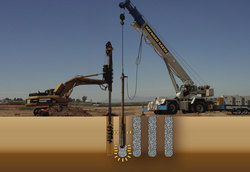 Hayward Baker, Inc. is providing a more cost-effective foundation system in the form of Vibro Piersâ„¢. Well-suited for light-to-heavy loads on large or small projects, Hayward Baker’s Vibro Piers are quick to install and highly effective at reinforcing the surrounding soils. [Editor: Read on for the rest of the press release]

This is a horrible and tragic story.  A sinkhole opened overnight on Thursday of last week underneath the bedroom of 36 year-old Jeff Bush in Hillsborough County, Florida. The man was swallowed by the sinkhole, […]