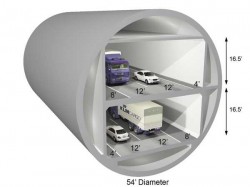 The tunnel replacing the Alaskan Way Viaduct (SR-99) will pass beneath 158 existing structures requiring an extensive program of vibration and settlement monitoring as well as some remediation. Of the 158 buildings, WSDOT identified 20 as needing some remediation, but the contractor has shortened that list to 7 structures. For those 7 the tolerable settlement is 1/2 inch, for the remaining, it is 1 inch. Remediation will consist of grouting in at least one case, and micropile walls in other cases where the tunnel alignment doesn’t pass directly underneath the structure. The existing viaduct will also get micropiles for stabilization. Utility relocation and geotechnical instrumentation will take place this year with additional work beginning next year. Tunneling won’t begin until mid-2013 on the $1.4 Billion megaproject. [Source: Seattle Times Newspaper. Image: Storify]

Micropile Underpinning of US 69 Bridge over Kansas River

A temporary micropile underpinning foundation system was used to support the abutments of the US 69 bridge over the Kansas River near Kansas City, KS while repairs to the abutment bearing devices were performed. This post is based on my notes from the presentation titled “Emergency Micropile Underpining of the U.S. 69 Truss – Kansas River Bridge” by Jim Brennan, Assistant [State?] Geotechnical Engineer with KDOT. It was the first presentation of the 34th Southwest Geotechnical Engineers Conference in Phoenix this week. Read on for more.

Video: Monitoring the ground and buildings during SR 99 tunnel construction

This is a great piece that covers a lot of ground about the project. The author included information on the background of the original highway, and a nice discussion of the political aspects that drove […]