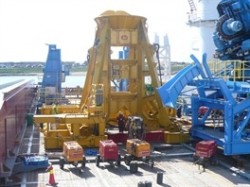 A new piece of equipment for deep ocean pile driving was recently used in 140m of water off the coast of Brazil. The StabFRAME is lowered to the sea floor and leveled to allow accurate driving of piles into the sea floor. See the video below for an example. More on the Brazil Project at the NCE link. [Source: Large Diameter Drill via NCE. Image: LDD] 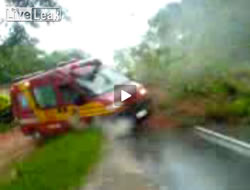 Dr. Dave has posted links to a few scary landslide videos from the recent heavy rains affecting the Santa Catarina province of Brazil. This latest one shows an ambulance being swept off a road by a “small” landslide. The ease with which the vehicle is moved is quite impressive. It didn’t appear that anyone was injured in this particular landslide but I’m sure there might have been some underwear changing involved. Elsewhere in the region people have not been so lucky and there is a heavy death toll. Click through for two videos.

PITTSBURGH, PA – July 13, 2010 – Nicholson Construction Company is pleased to announce that Soletanche Freyssinet, a world leader in civil engineering and construction, acquired Agra Foundations Limited on June 25, 2010. Agra Foundations specializes in piling and ground improvement. Agra is headquartered in Edmonton, Alberta, and primarily operates in Western & Central Canada, where it has six office locations. Agra Foundations will continue to operate as an autonomous company, under the leadership of their President, Derek Harris, P.Eng, a 28 year veteran of the company.

[Editor] Read on for the rest of the press release from GeoPrac.net sponsor Nicholson Construction Company. [/Editor]