A backyard-sized sinkhole opened up recently behind a Windermere, Florida home, causing the home to be deemed unsafe. The residents said one of their kids was enjoying a hammock in the area just the night before. All of the kids and pets living in the house were safe even though the roughly 100 foot by 100 foot sinkhole came within about 3 feet of the house. The residents were renting the house and the home owner had sinkhole insurance. [Source: MSN. Image: CBC.CA]

Here is some raw video footage of the sinkhole to give you a better perspective from the ground and the air.

Video of Car Swallowed by Sinkhole Related to Tunneling in Cairo, Egypt

September 29, 2009 rockman Failures Comments Off on Video of Car Swallowed by Sinkhole Related to Tunneling in Cairo, Egypt 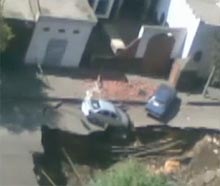 On September 3, a sinkhole opened up on a downtown Cairo street, swallowing the car pictured here. According to the description accompanying the video uploaded to YouTube by TheDailyNewsEgypt, the sinkhole was related to tunneling activities for the Cairo Metro line that is currently under construction. Click through for the video. […]