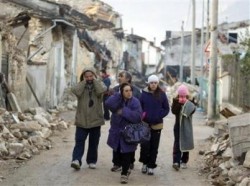 In a ruling that has rocked the geophysical community, six Italian scientists and one government official have been sentenced to 6 years in prison for failing to give adequate warning of a 2009 earthquake that killed 300 people in L’Aquila.

The seven, all members of a body called the National Commission for the Forecast and Prevention of Major Risks, were accused of negligence and malpractice in evaluating the danger and keeping the central city informed of the risks. The case has drawn condemnation from international bodies including the American Geophysical Union, which said the risk of litigation may deter scientists from advising governments or even working in seismology and seismic risk assessments.

This case is alarming on many levels. Do you think it will have reprecussions on the way seismology and analysis of other geologic hazards will be practiced in the US and other areas outside Italy? Leave a comment or tweet @geoprac. [Source: Reuters. Image: REUTERS/Chris Helgren /Files]

David Petley from Dave’s landslide Blog has been on a trip to Sichuan Province in China, site of last May’s tragic earthquake and deadly landslides. He has posted a 5-part series at his blog with […]