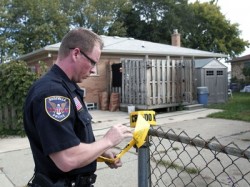 Police were investigating the driveway of a home in suburban Detroit where a man though he saw the body of Jimmy Hoffa being burried 35 years ago. They used ground penetrating radar to image a portion of the driveway at the house, and noted that the GPR survey did indicate disturbed earth. The police were careful to indicate they didn’t believe it was Jimmy Hoffa, but they were investigating the potential of a body at the location. Soil borings were conducted to a depth of 6 feet and the samples were taken to forensic anthropologists at the University of Michigan to check for human remains according to a followup article. Since there was nothing else in the news, I’m guessing that they didn’t find anything…the mystery of Jimmy Hoffa continues! [Source: thespec.com. Image: Bill Pugliano/Getty Images via The Spec]