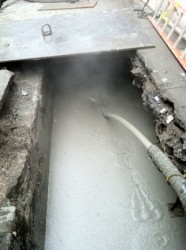 An article in TBM magazine provides a nice overview of cellular concrete technology. I never knew this (although it makes sense) but the material was used primarily as a lightweight floor leveling product for high-rise construction when it first came to the US in the 1950s. The article finishes with an overview of why cellular concrete is well-suited for grouting applications associated with tunneling and pipeline work. [Source: Read the full article at Tunnel Business Magazine via Cell-Crete Newsletter. Image: Tunnel Boring Magazine]