Michael McVay and Khiem Tran of the University of Florida have produced a report for the Florida DOT on the detection of sinkholes using full-field seismic waves. Here is the abstract:

This research presents an application of two-dimensional (2-D) time-domain waveform tomography for detection of embedded sinkholes and anomalies. The measured seismic surface wave fields were inverted using a full waveform inversion (FWI) technique, based on a finite-difference solution of 2-D elastic wave equations and Gaussâ€“Newton inversion method. The key advantage of this approach was the ability to generate all possible wave propagation modes of seismic wave fields (body waves and Rayleigh waves) that were then compared with measured surface data to infer complex subsurface properties. Both the pressure wave (P-wave) and shear wave (S-wave) velocities were inverted independently and simultaneously. The FWI was applied to two synthetic and four real experimental data sets. The synthetic inversion results showed that the inversion was capable of detecting layering (e.g., strong over weak), and anomalies; in addition, the initial input velocity profile for the inversion was straightforward (i.e., linearly increasing with depth). The developed FWI algorithm could run on raw collected data with a minimum manual effort (no picking of first-arrival travel times). The inversion results of real data sets showed that the waveform analysis was able to delineate: 1) an embedded concrete culvert; 2) extent of multiple existing sinkholes/chimneys; and 3) a complex profile with an embedded void (unknown at time of data collection) and highly variable bedrock both laterally and vertically. Independent invasive testing (standard penetration test, SPT, and cone penetration testing, CPT) was conducted to verify the seismic test results. Finally, for the cases presented, the 2-D full waveform inversion was found computationally practical, i.e., the results were achieved in 2-4 hours of computer time on a standard laptop computer.

A Japanese company, OYO Corporation, created the PS-suspension probe for recording P-Wave and S-Wave velocity data in geomaterials using one borehole back in the 1980’s. A recent update to the probe has made it digital. […] 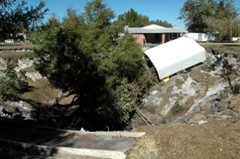