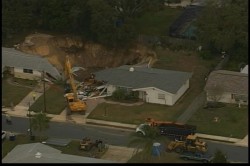 A large sinkhole near Dunedin, Florida destroyed two homes, but the occupants were not injured. The 90′ diameter by 50′ deep sinkhole opened up in an area of Florida that is prone to sinkhole activity. The portion of the homes not destroyed by the sinkhole was demolished by authorities. See the video below. [Source: NBC News. Image: Bay News 9]

When your gypsum plant is capable of producing 900 million square feet of wall board every year, you can’t afford to see your process shut down by settlement or problems with groundwater infiltrating or soil […]