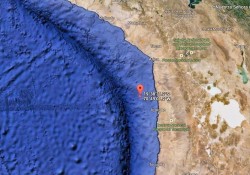 A magnitude 8.2 earthquake struck off the coast of Chile late Tuesday. The damage estimates will probably begin rolling in today, but early indications are that it could have been much worse. Some 5 people have been killed in the early figures. There have been reports of landslides and disruption of communication facilities. A tsunami warning was triggered, and there are warnings of high water levels and strong currents impacting Hawaii, but so far no reports of a major tsunami along the Chilean coast. [Source: CNN.com. Image: Ontario-geofish]

Bute Inlet Landslide and Tsunami in BC

June 28, 2021 rockman Geologic Hazards Comments Off on Bute Inlet Landslide and Tsunami in BC

A massive November 2020 landslide and glacial lake outburst near Bute Inlet in BC created a seismic signal equivalent to a 4.9 magnitude earthquake! On November 28, 2020, at about 6 a.m., approximately 18.5 million […]