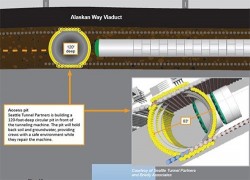 Seattle Tunnel Partners released a new schedule this week for the repair of the damaged seals on the Bertha Tunnel Boring Machine. This revised schedule shows that the TBM won’t be digging again until March of 2015. The excavation of the pit to access the TBM will begin at the end of May, a delay caused by additional archaeological work. By October they hope to have the cutterhead removed to conduct the repairs, and the machine will undergo testing in February of 2015 with tunneling resuming in March of 2015. [Source: WSDOT. Image: WSDOT]

May 16, 2007 rockman Project Related Comments Off on $1 Million More for Geotechnical Work on Seattle Light-Rail Tunnel

The Seattle Post-Intelligencer reports that Seattle’s "Sound Transit" board members have approved an additional $1 Million in funds for "unanticipated" geotechnical engineering related to the Beacon Hill light-rail tunnel. The project geotechnical firm is Shannon […]

WSDOT held a press conference on Friday to discuss findings regarding the obstruction that had stalled the Bertha Tunnel Boring Machine since December 6. It is an 8 inch well casing, 119 feet deep from […]