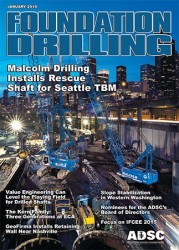 The excavation has been completed for the access shaft or rescue shaft that was needed to be able to remove the damaged cutterhead of the Bertha TBM on the Alaskan Way Viaduct Replacement project in Seattle. The target depth of 120 feet was reached on January 30. WSDOT reports that settlement levels have remained stable in the pit area after an earlier settlement issue. In addition to the project update on the WSDOT project page, there is an excellent article on the work done by Malcom Drilling to construct the shafts used to form the excavation walls in the January issue of Foundation Drilling Magazine. I highly recommend that article. You can also see some neat raw video from WSDOT below.

Dr. Jesus E. Gomez has joined GEI Consultants as a vice president and will lead their geotechnical and geostructural practice in the Philadelphia region. Dr. Gomez has over 30 years of experience, and was previously […]

After tunneling 9,270 feet under downtown Seattle, the Bertha tunnel boring machine finally broke through at the north portal yesterday. The breakthrough marks a major milestone in the project to replace the seismically deficient SR-99 […]