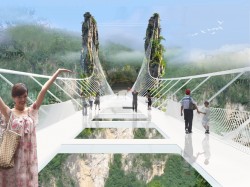 Check out this proposed bridge in China’s Zhangjiajie National Forest. It has a span of 1,200 feet and is over 1,300 feet off the ground. The majestic landscape was reportedly the inspiration for the Halleluja Mountains of James Cameron’s movie Avatar. The bridge architect that designed it initially refused saying the landscape was too beautiful to put a bridge there. But agreed only if they could design a bridge that would ‘disappear’. The 20 foot wide platform is slated to host fashion shows, and the center of the structure will be used for bungee jumping! [Source: Wired. Image: Wired]

According to the Landslide Blog, this rockfall video was taken in Maoxian County in Sichuan Province of China on or around July 17, 2014. It shows a very dangerous rockfall event with people running from […]

The City of Zhengzhou is set to become a major rail crossroads for China, located at the intersections of China’s major North-South and East-West lines. Currently tunneling with tunnel boring machine (TBM) is taking place […]

GEO-SLOPE International, makers of the GeoStudio 2007 geotechnical software suite have announced a version 7.16 update for their GeoStudio 2007 software products, which includes SLOPE/W, SIGMA/W and SEEP/W, QUAKE/W and others. The major change is […]