How do you build a 2H:1V concrete ski jump?  In April of 2017, the Utah Olympic Legacy Foundation turned to Presto, the makers of GEOWEB, to design a concrete GEOWEB structure approximately 30 feet wide and 160 feet long and 4 inches deep. The site is an official USOC training site used by Olympic Ski and Snowboard Teams for ski jump and freeskiers and snowboarders. 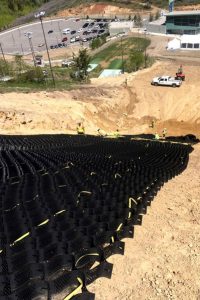 The contractor first had to grade the steep slope very precisely in order for the system to be installed correctly.  Then a row of deadman anchors was installed 5 ft behind the crest and six tendons attached the GEOWEB panel to the anchors.  The concrete was poured in 15 foot sections, beginning at the top, in an alternating pattern.  Finally, 4-inch by 36-inch “ski tiles” were attached to the ramp using ramset anchors.  The tiles were installed in an overlapping pattern similar to roof shingles to provide a smooth run for the athletes. 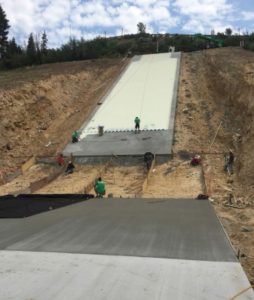 Finally, the jumps were installed at the bottom of the slope and a large airbag was anchored at the bottom.  The airbag is used only in the summer as the athletes prefer to practice on snow in the winter.  Artificial snow is blown onto the slope and a snowcat is used to groom the slope by attaching it to the top of the hill with a winch.

The project was completed in early June of 2017 and provided a safe training ground for the US Olympic Team aerialists competing in the PyeongChang 2018 Winter Olympics! 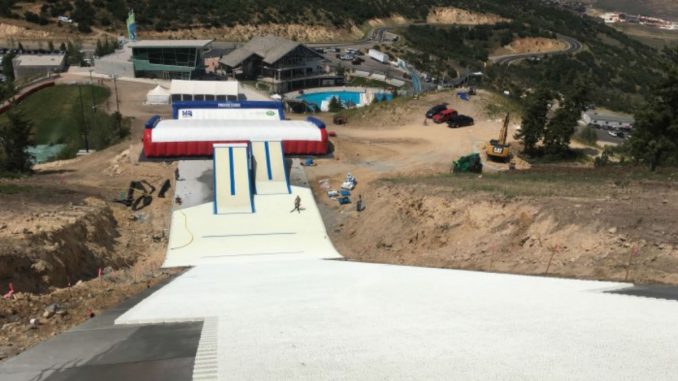 The Geology of Curling Stones

February 17, 2022 rockman Miscellaneous Comments Off on The Geology of Curling Stones

I don’t know about you, but my family has been very interested in the unique sport of Olympic Curling at this year’s 2022 Winter Olympics. Did you know that 70 percent of the world’s curling […]

Threading the Needle through an Olympic Venue

January 11, 2012 rockman Project Related Comments Off on Threading the Needle through an Olympic Venue

The Fitzsimmons Creek run-of-river hydroelectric project consisted of a number of geotechnical challenges for design team member Golder Associates. The project site is in British Columbia’s Coastal Mountains, and ran adjacent to the bobsleigh (or […] 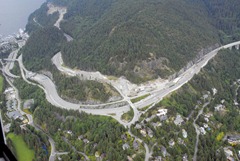