A preliminary investigation report notes that “land subsidence” was the cause of a June 7th pipeline explosion near Moundsville, West Virginia, in other words, a landslide.  An 83-foot section of the 36-inch diameter pipeline was “ejected from the ditch and deposited in the right of way” by the explosion and the fireball consumed approximately $430,000 worth of natural gas.  Fortunately, there were no injuries or reports of private property damage.  The Pipeline and Hazardous Materials Safety Administration of the USDOT issued a Notice of Proposed Safety Order on July 9 that also noted that a geotechnical flyover after the explosion by the pipeline operator, TransCanada, has identified 6 other areas of concern due to the existence of large spoil piles, steep slopes, or indications of slips.  Part of the mitigation for the accident is for TransCanada to perform additional geohazard surveys and monitoring.

A teenage girl strolling on the beach in Pacifica, California was buried alive by a landslide. She was buried up to her chest, and a passer-by dug her out with his bare hands while more soil and rock fell around them. Story at KTVU San Francisco. See a nice oblique aerial photo of the beach prior to the landslide here. Those slopes don’t look particularly stable to me but what do I know? 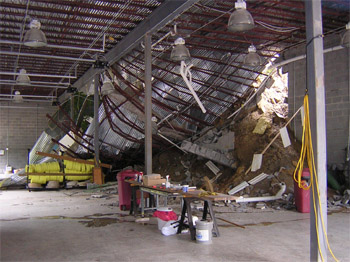 Geology.com pointed out a very nice PDF version of a Power Point presentation by the North Carolina Geologic Survey on their landslide hazard mapping efforts in western North Carolina. The presentation was dated August 1 of last year. The NCGS also has their landslide mapping products available for download, and those so inclined can download the GIS data sets as well. (Photo by NCGS)