The Geotechnical Extreme Events Reconnaissance (GEER) Association has released Version 1.0 of their report for the November 30, 2018, M7.0 Anchorage Earthquake. The GEER Phase I team collaborated closely with a number of other agencies as well as the local geotechnical community to perform their investigation in Early December, 2018.  The event was noteworthy for a number of reasons, including the fact that no fatalities were recorded, and that most of the infrastructure damage reported was non-structural. They also note that nearly all of the significant embankment slope failure that occurred along Alaska’s highway and arterial roads were repaired by AKDOT within one week…a remarkable feat.  Despite these factors, the report cautions that the event should not be dismissed as an “insignificant event.”

Some of the significant lessons learned that are discussed in the report include:

The report was issued as Version 1.0 on January 2, 2019, and will be followed by a more detailed report (Version 2.0) in early 2019.  The GEER Phase 2 investigation team will deploy in the spring of 2019 after snowmelt and will focus on remote sensing and geophysical data collection.

For more info and to download the report, visit the GEER 2018 Anchorage Earthquake page. 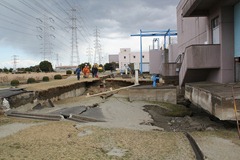 The 1964 Alaska Earthquake was 9.2 in magnitude and caused dramatic destruction and dramatic examples of surface rupture, subsidence, and liquefaction. New paleoseismic evidence points to a previously unknown earthquake that happened on the same […]

May 19, 2014 rockman Geologic Hazards Comments Off on Magnitude 9.2: The 1964 Great Alaska Earthquake

It’s been 50 years since the Magnitude 9.2 Great Alaskan Earthquake so dramatically altered people’s perceptions of the power of earthquakes. Check out this short video from the USGS: [Source: YouTube via AEG Insider. Image: […]