October 17, 1989 at around 5 pm, a magnitude 6.9 earthquake known as the Loma Prieta Earthquake struck the San Francisco Bay area causing significant damage and loss of life. Many remember the fact that the San Francisco Giants were playing the Oakland A’s in the Game 3 of the World Series, the “Bay Bridge Series”. For me, the images that stick with me are those of the pancaked Oakland Cyprus Freeway where hundreds were trapped and 42 people were killed. The video below is a documentary produced by the Bay Area’s NBC affiliate.

Also on this anniversary, people are talking about a new earthquake early warning system for California that is being rolled out. Alerts will be sent out via a smartphone app, MyShake, and a more traditional wireless system, similar to how amber alerts are issued. It may give California residents a few precious seconds (reportedly 1 second to tens of seconds) to “drop, cover, and hold on” before a major quake. The system uses a network of seismic sensors to detect the first arrival of seismic waves before the more damaging waves follow. The amount of early warning someone gets will be a function of how close they are to the epicenter. 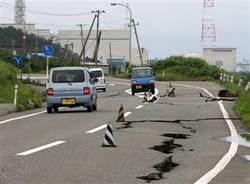 A magnitude 6.8 earthquake struck Japan on 7/16/07, killing 9 and injuring more than 150. The hardest hit areas were near the town of Kashiwazaki, northwest of Tokyo. It triggered mudslides in the town that was already effected by a Typhoon several days before. One of the most newsworthy things about this earthquake is the damage to and minor leakage of radioactive waste and coolant from the world’s largest nuclear power plant in Kashiwazaki. Read on for links and video. (Photo by Kazuhiro Nogi, AFP – Getty Images)