In Louisville, KY a large pit, 40ft deep, 300 yards long x 150 yards wide was dug to build an overflow facility for the city’s combined stormwater and sewage systems. A substantial amount of this excavation was rock, with the top 4ft being very unstable. Large chunks of the rock had broken off creating large cavities at the top section. The City needed to fill the voids and create a flat plane in order to tie in rebar forms to construct the facility’s concrete walls and foundation.

The general contractor, MAC Construction, contacted NCFI about using a TerraThane system to fill the voids, some being as large as 20ft wide, 5ft deep and 4ft tall, so the project could progress. In order to effectively fill these voids, NCFI recommended the TerraThane 24-023. Due to its low exothermic properties, the 24-023 would allow for mass polymer placement. In order to install the placements, the performing contractor Purefoam used a boom lift to get the sprayers up to the work areas from the bottom of the pit.

Over 8 separate days, Purefoam installed 9000 pounds of the TerraThane 24-023 to fill approximately 4,000 cubic feet of voided areas. The flat plain was established and the voids were filled, allowing for the project to continue with minimal interruption to its schedule.

I’m pleased to announce that I will be a guest speaker at the monthly webinar of URETEK Holdings, an affiliate of GeoPrac sponsor URETEK ICR.  I will be presenting on Geotechnical Aspects of Polyurethane Grout, […]

The Curious Case of No. 57 Stone

May 12, 2014 Katherine Witt Articles, Forensics and Failures Comments Off on The Curious Case of No. 57 Stone 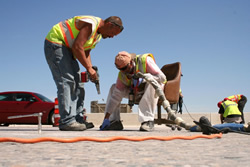 August 11, 2011 MOUNT AIRY, NC—Gary Molstre, owner of Mudpumpers Mudjacking, Moorehead, MN, says there is no chance they are changing the company name, but they are definitely changing the material they use to repair highways and bridges to an engineered polyurethane foam system and they’ve coined a term for it: “foamjacking”.

Mudjacking, also called slab jacking, concrete lifting, concrete raising, and slab leveling, is the traditional method of fixing damaged concrete highways and bridge approach panels. The process was developed in the 1930s and involves pumping “mud” (everything from clay, sand, and loam, to Portland cement, fly ash, lime, casting plaster, and hot asphalt have been used) beneath concrete slabs that have become uneven, sunken, and/or pulled away from bridge approaches due to soil erosion and/or the soil being compacted or compressed from the sheer weight of the slab. Mudjacking involves drilling holes in the concrete and pumping “mud” and pressure beneath to lift the slab to its original place and keep it there. [Editor] Click th rough for the rest of the press release. [/Editor]