Rock cuts are usually formed by blasting or heavy ripping. Cuts formed by blasting, unless controlled blasting techniques are used, tend to be rougher than cuts formed by heavy ripping. There is a wide variety of blasting approaches that can be brought to bear on roadway excavation projects. These range from ordinary production blasting techniques, where the slope configuration is entirely defined by over break, to controlled â€œsmooth blastingâ€ techniques, where the slope configuration is entirely defined by the position of the drill holes. â€œControlledâ€ means that the charge, hole location, and hole orientation are carefully controlled to produce a specific shear plane or rock surface after blasting. The traditional method of forming highway cut slopes is to use smooth blasting techniques, but this is not ordinarily allowed where natural appearing slopes are required. Smooth blasting techniques include pre-split blasting and trim blasting. Roughened slopes can be produced using â€œcushionâ€ (buffer) blasting, horizontal hole blasting, or, for flatter slopes, step drilling. These last 3 techniques can be modified to qualify as â€œcontrolledâ€ blasting.

Any blasting done for the creation of permanent slopes must first appreciate the role of the burden. Burden is the â€œworkâ€ done by any given blast hole, and represents the distance to the closest plane of relief. Burden is the most important blast design parameter. Carefully balancing the burden with the strength of the rock mass to remain behind is the key to attaining stable slopes with minimum disturbance. The chief difference between various methods of controlled blasting is the burden at the time the controlled holes are fired.

In presplit blasting, the slope is defined by carefully aligned blast holes, containing light charges, which are fired prior to the detonation of production blast holes, either separately or within the same blast on an early delay. Either way, at the time the presplit blast holes detonate, their burden is mechanically infinite, so the path of least resistance for the explosive energy is between drill holes. The charge is selected such that it will produce a single crack between holes, without rupturing or crushing the hole walls. A properly blasted presplit slope will contain drill hole half rounds over almost its entire length. The presplit crack tends to prevent the migration of energy and blast damage from the subsequent production blasting, preserving the integrity of the finished slope.

For most rock, the presplit drill hole spacing is between 10 and 14 times the drill hole diameter. A common charge density for presplitting is in the neighborhood of 0.1 lbs. per square foot of face area. Weak rock, and rock with close fracture spacings, is more difficult to presplit than strong, brittle rock and requires closer drill hole spacings and lighter charges within each hole. The charge is ordinarily smaller than the diameter of the hole, typically about 0.3 times the hole diameter, meaning that it is surrounded by air space. This reduces the crushing around the blast hole perimeter. When presplitting, drill hole accuracy is paramount. Most presplitting specifications require accurate hole location (generally 0.1 to 0.2 times the drill hole spacing) and accurate hole orientation. Ordinarily, presplit holes are detonated either simultaneously or with very short (less than 25 millisecond) delays between holes. Results tend to be best with simultaneous firing, but vibration control requirements may require delays. In trim blasting, a similar approach is used as with presplitting, the primary difference being the timing of the trim detonation with respect to that of the production blasting. In trim blasting, the trim holes are shot after the production blast holes, and began may be shot with the production in the same blast or as an entirely separate event, although the former approach is preferred. For a given hole diameter, the spacings will be slightly greater in trim blasting (normally about 14 to 20 times the hole diameter). Trim blast loading densities are about the same as presplit blast loading. The result is a more ragged face, but one with a significant percentage of drill hole traces.

Either presplit or trim blasting can be used where the aesthetic enhancements cater only to the long range perspective. Because of the high degree of slope angle control afforded, slope variation and slope warping can be effectively performed with these techniques. If machine scars and drill hole traces must be prevented, these smooth wall blasting techniques will not be suitable.

Ordinary production blasting can be used to form roughened highway cut slopes but the results will be unsatisfactory as to slope stability, rock fall, and safety. Where it is necessary to form roughened cut slopes, without greatly impacting slope angle or slope integrity, there are three categories of techniques that can be used.

A technique commonly known as â€œcushionâ€ blasting is a modified trim blasting technique that strikes a balance between slope roughening and minimized backslope disturbance. (Actually, what is referred to by many as â€œcushionâ€ blasting for aesthetic enhancement is more properly termed â€œbuffer blastingâ€ because cushion blasting originally referred to a method of filling the annulus around decoupled charges with loose inert material.) Various cushion blasting approaches have been used, differing according to the cushion hole spacing, the buffer standoff distance, loading density, and detonation timing. The best approach is to use buffer holes to control the degree of burden experienced by the cushion blast holes (Figure 13). The cushion blast holes are essentially trim blast holes, but set at wider spacings with slightly higher charge densities, in order to produce a slight degree of back break. The buffer holes are drilled on the production hole spacing, but are loaded more lightly than the general production blast holes (Figure 14). Because the cushion holes are drilled at the finished slope angle, but will detonate with a highly controlled degree of burden, the over break from them can be limited to the minimum that will prevent deleterious drill hole traces, but preserve overall rock mass integrity. 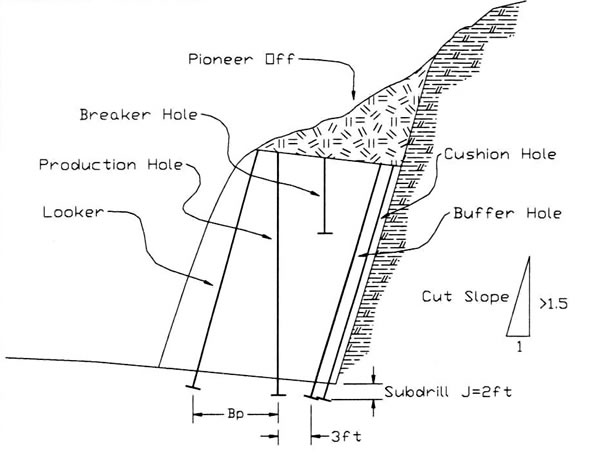 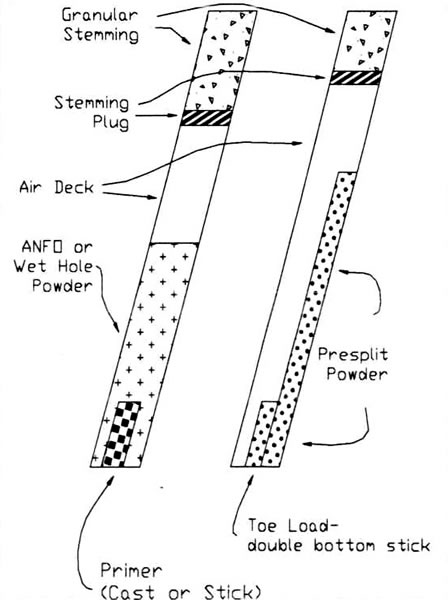 In order to implement a cushion and buffer blasting program, it is important to conduct a test blasting program, and to continuously assess the relationship between the pattern used and the results obtained. Therefore, the process of developing, reviewing, and back analyzing blasting plans is an important facets of the overall process. Figure 15 shows the result of a cushion and buffer blasting process, used on a recent highway project in Arizona. The production blast holes were 6 in. in diameter, the cushion holes were 3 in. in diameter, and the buffer holes were 3.5 in. in diameter. Although there are a few hole traces, they are scarcely noticeable. Very little rock has accumulated in the cut ditches since the completion of this excavation. 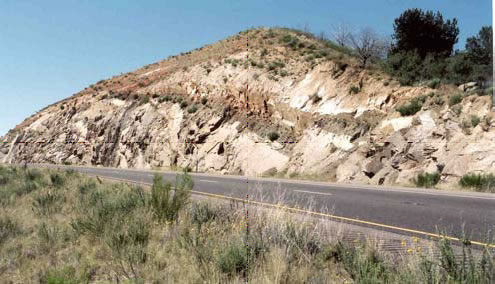 Figure 15 Slope resulting from cushion blasting along SR 87 in Arizona.

Flatter slopes can be formed with step drilling (Figure 16). Because step drilling relies on back break between holes to form the finished slope, it is not technically a â€œcontrolledâ€ blasting approach. However, where cuts must be developed at slopes ranging between 0.7:1 and 1:1 (H:V), the use of sloped controlled blasting holes is difficult and usually unwarranted. Therefore, an approach has been used on certain projects whereby the contractor is afforded a pay item to tighten the step drilling pattern and use lighter, distributed charges to avoid point loadings along the slope. On several Arizona projects, in blocky volcanic rock, good results with minimal overbreak have been obtained using this approach, and it has proven popular with contractors who favor the vertical drilling setup.

In massive rock where drill traces absolutely cannot be tolerated, or in sliver cuts with poor access to the crest for drilling, horizontal hole drilling may be worthwhile (Figure 17). Horizontal drilling is demanding for the driller, who must maintain orientation, location, and depth accuracy to a greater degree than for any other method. In particular, depth control is critical to prevent bootlegs and special drilling equipment is needed that is capable of the vertical reaches required. The patterns for step drilling must be tighter, because the blast must counteract gravity, and special loading and timing allowances are needed. Also, explosives loading into horizontal holes is more complicated, requiring either packaged product or pneumatic loading of bulk product, and special stemming procedures to prevent ejection and rifling. 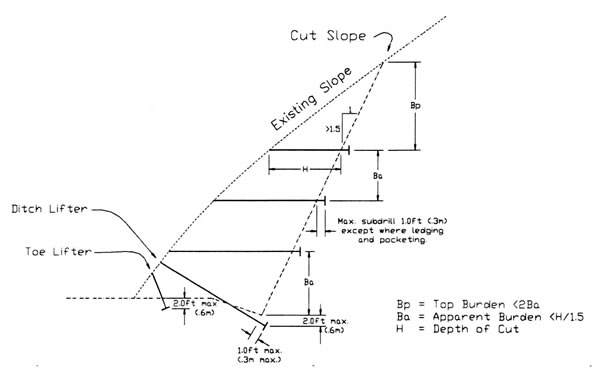 This is a great video montage of rock blasting for Washington State DOT’s I-90 Snoqualmie Pass project. It’s not clear from the description if this blasting actually occurred on this project or its from other […]