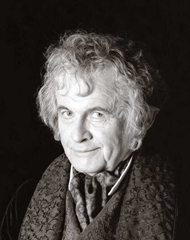 Maybe its a physical resemblance to Sir Ian Holm who played Bilbo in the movies, or perhaps its to the hair or maybe its the muted Welsh accent, I dont’ know. But I think the comparison struck me even more after reading on his website about various adventures he has experienced on his path to becoming a successful geological engineer. I’m still wading through the entertaining posts from his personal website, but it sounds as if he had his fair share of challenges growing up, and didn’t end up working on his PhD (at Berkley) until he was in his 40’s.  It sounds like he took a rather circuitous route through his career, and some of his colleagues had pegged him as a failure. Like I said, I still have more reading to do, but if you’re interested, his blog is one of the more entertaining ones I’ve read!

At any rate, his talk this evening was very entertaining, and it reminded me of so many of the things I like about geological engineering…things I sometimes forget during my practice as a geotechnical engineer. To give you a flavor of the talk, and his colorful writing and presentation style, check out the abstract from his Jahns Lecture page:

Something to Chew on- Rock is More Nutritious than Dirt: A medley of geoengineering presentations is scrambled to provide oft-neglected supplementary nourishment to soils engineers afforded by rock engineering. Ingredients in the Lecture may include (at the whim of the chef): an analysis of high cut slopes, and characterization of weak rock masses using the Hoek-Brown Failure Criterion, “layered” on the basis of depth varying Geological Strength Indexes; description of the simple Geological Engineering basis for confidence in the rock mass stability of the walls of lava tubes caves during retrieval of a buried collection of unique Hawaiian cultural artifacts; and, why you should care about melanges and other block-in-matrix rocks (bimrocks).

I forget the exact terminology he used, but one of the most poignant series of slides for me was when he was discussing the volumetric distribution of rock blocks in a melange or bimrock unit. He showed a cartoon diagram of a cross-section of block-in-matrix material, then he took thin vertical slices of the entire section, analogous to boreholes. His point was the difficulty of estimating the percentage of blocks by volume based solely on borings.

He further emphasized his point by making the audience do an exercise where they held their hands up together leaving a vertical slit in between. He told us to look at something in the room, and take a “mental digital picture”, then look around the room and take 4 or 5 more “digital photos”. Then he said to imagine emailing the digital pictures to someone and asking them to recreate who and what was in the room. It puts a whole different spin on what we geotechs do as a matter of routine!

His case studies on cut slopes for a landfill expansion in bimrock and his work collecting archaeological artifacts in lava tubes in Hawaii were both fascinating. The preceding sentence doesn’t do the topics justice of course, but I’m running out of steam.

It’s getting late and I should go to bed, but I wanted to share a few more personal notes about Ed. He clearly shares a view held by Richard Jahns as well that professors of geological engineering should work in the real world and take that knowledge back to their teaching…a philosophy that I agree with wholeheartedly. He clearly is passionate about the profession and his work, and his enthusiasm is very apparent in his presentation. And I mentioned that I judged him to be a very genuine person…I only conversed with him briefly, but I introduced myself and he remembered me from our email exchanges (he might provide an article based on his photogrammetry papers/presentations) and remembered that he had promised an article. He was also very appreciative of me making the trip up to see his presentation and he asked me a question that nobody has really asked me before…why I give up my time to the GeoPrac site. Maybe it take a fellow blogger to see the amount of effort involved in keeping up a site like this, and he must have known that I have some of the same passion that he has for our profession. Maybe that’s why I liked him.

The Deep Foundations Institute (DFI) is soliciting abstracts on a broad range of topics for its 38th Annual Conference on Deep Foundations in Phoenix, Arizona on September 25-28, 2013. Although the submittal date for abstracts […]