The Deep Foundations Institute (DFI) is soliciting abstracts on a broad range of topics for its 38th Annual Conference on Deep Foundations in Phoenix, Arizona on September 25-28, 2013. Although the submittal date for abstracts […]

Magco was the drilled shaft subcontractor for Hansel Phelps Construction on two separate contracts on the Terminal 4 Project at the Phoenix Sky Harbour Airport. In this very nicely written article, the numerous material, equipment, […] 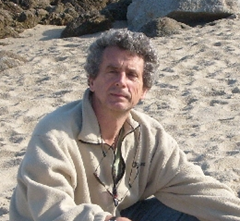 Its been a while since I’ve posted in Rockman’s ramblings. But tonight as I try to wind down from a stressful drive back to Tucson from Phoenix on a very windy night, I feel the muse at work. Maybe the martini is helping too! Tonight was a meeting of the Arizona Section of the Association of Engineering and Environmental Geologists (AEG). The speaker was the 2009 AEG Jahns Distinguished  Lecturer, Dr. Edmund Medley of Geosyntec Consultants.

He’s perhaps best known for coining the phrase “bimrocks” for block-in-matrix-rock. He’s also written and presented some stuff on terrestrial 3d photogrammetry for geological engineering.  He’s an incredibly colorful, energetic, and genuine man who is a very entertaining and gifted writer and presenter. I was glad to meet him after trading a few emails previously. I’m not sure how he would feel about this comparison, but for some reason he reminded me of Bilbo Baggins. (Photo from EdMedley.com) 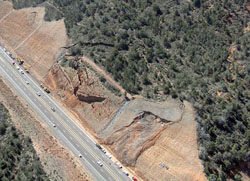 Back in March of 2008 there was a landslide that closed SR 87 in between Phoenix, Arizona and Payson. It’s been of great interest to me since it is in my state and affected a highway. I was hoping my firm (NCS Consultants, LLC) might be asked to work on the remediation through our on-call contract but it didn’t happen. Its probably for the best, it sounds like it’s been a troublesome geotechnical engineering problem. Fast forward to last week, and the slide area was in the news again because the slope is still moving and apparently causing some additional deformation of the roadway. (Photo by ADOT)

I had heard about this a while ago through our ADOT contacts, but I make it a policy not to take advantage of my contacts through my day job for GeoPrac.net content (not without permission anyway). So I didn’t want to blog about it until it hit the mainstream media. Last week, the Arizona State Geologist blogged about the SR 87 slide moving again, as did Ken through his AEG Arizona Section blog. It was even covered on one of my favorite blogs, Dave’s Landslide Blog. I finally have a chance to wade through these blog posts and some of the reports and videos to present a summary of the situation, available information and offer my own perspective. (More after the break)