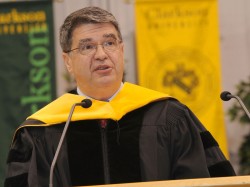 Bernard Amadei, the founding president of Engineers Without Borders – USA and the co-founder of the Engineers Without Borders-International network, received an honorary doctor of science degree at Clarkson University’s 118th Commencement last weekend. Amadei is a professor of civil engineering at University of Colorado at Boulder, and was one of Richard Goodman’s students at Berkeley. He is a member of the prestigious National Acadamy of Engineering, and has previously served as president of the American Rock Mechanics Association (ARMA). [Source: Clarkson University. Image: Clarkson University]