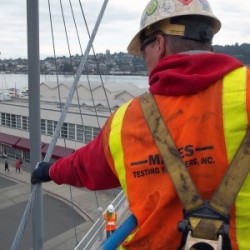 Terracon has acquired Mayes Testing Engineers based in Lynnwood (Seattle) Washington. Mayes is a 115 person firm specializing in welding, concrete, soils, masonry, asphalt, and non-destructive testing in the Pacific Northwest. From the Terracon Press Release:

Terracon’s expansion brings together the acquired resources of Mayes, RGA Environmental, and Argus Pacific all in the Pacific Northwest. Terracon companies now combine to include six Seattle/Tacoma and two Portland, Ore., locations. The move also becomes Terracon’s fifth acquisition in the West in the past two years, having also acquired NORCAL Geophysical Consultants and Neil O. Anderson and Associates.

Terracon is expanding into the Virgina market through the acquisition of Geotechnical Consulting & Testing Inc. (GC&T), headquartered in Woodbridge, with a laboratory in Dulles. This is Terracon’s 4th acquisition of 2016. Formed in 1990, […]

OLATHE, Kan. – Terracon is pleased to announce it has acquired GET Solutions, Inc. (GET). As their name represents, GET is a full-service geotechnical, environmental, and materials testing firm serving public- and private-sector clients throughout […]

OLATHE, Kan. —  Terracon is pleased to announce M. Gayle Packer is now chief executive officer and president of Terracon Consultants, Inc. This completes a deliberate, multiyear CEO succession process, and follows her appointment as president in […]