A roughly 4-foot boulder traveled over 2,200 linear feet, losing about 1,000 feet in elevation and somehow stopped mere feet from a Springville Utah resident’s front door! And people were watching it unfold from the front porch no less. The rockfall event occurred on July 16, 2019, while the Round Fire was burning in the area. The fire is potentially a triggering mechanism for this event, burning vegetation around the rockfall source area and subjecting it to drastic temperature changes.

“It kept bouncing toward us,” Kathy Robertson said, “and my friend goes, ‘Come on, we gotta run, we gotta run!’ We were sitting on the patio, and I go, ‘Where, where?!’”

Her neighbor, Les Birch, said he threw down the garden hose and ran in the house, panic-stricken. He said it was scary watching the rock “making 40 to 50 yard skips at a time.” “I think we’re all fortunate it didn’t take a house out,” Birch said. “It’s big enough. It could’ve.”

Now the Utah Department of Natural Resources has produced a great video recreating the path that the boulder traveled (see above). It shows where the boulder bounced, creating a crater in the street and damaging some landscaping. But it truly is a miracle that there was not any more serious damage or injuries. 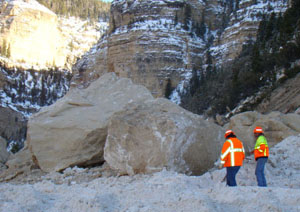 Man Killed After Fall During Rock Scaling Work in Colorado

GeoStabilization international helped Colorado DOT get highway 145 reopened after two massive rocks rolled down the slope cutting an 8 foot trench across both lanes. GSI had a team of scalers helicoptered up to the […]