The subsurface geology of the City of Melbourne and it’s arts precinct is becoming an art exhibit itself.  Golder has been involved in a geotechnical investigation at the site of the Testing Grounds, a  “temporary space for creative practices encompassing art, performance, and design.” While currently the site of the outdoor art exhibits, it is the only undeveloped parcel in the area in the revitalized area know as the arts precinct.

Golder generated a 3D model of the subsurface in the area and had it 3D-printed.  The physical model will be the centerpiece of an exhibition titled “Turning Digital Geology into Art: an underground journey into Melbourne’s arts precinct”, which will also feature geological core samples, multimedia and more.

“It’s unbelievable that 800,000 years ago our site was filled with lava from a big volcanic eruption before becoming a riverbank, a swamp, and then a riverbank once again following European settlement,” said Testing Grounds Project Director and Curator, Arie Rain Glorie. “We’re delighted to be partnering with Golder in such a creative way to educate the public on the amazing geology of our site, the arts precinct and the city of Melbourne.”

The exhibition runs from August 21 to 30 at Testing Grounds. More info on Golder’s website. Image courtesy of Golder.

[Editor] GeoPrac.net owner and editor, Randy Post, is an employee of Golder. The views and opinions expressed on this website are his own and not those of Golder. [/Editor]

The Microsoft Virtual Earth 3D team has released a tool that allows you to semi-automatically position a photo in 3D space. I wrote an article about how to geotag your photos, which results in photos with latitude and longitude written to the EXIF headers of the image. Programs like RoboGeo also support the direction of the camera, but this tool goes quite a bit further to fully orient your photo in 3D space. Click through for more info. (Image Credit: Virtual Earth 3D Team Blog) 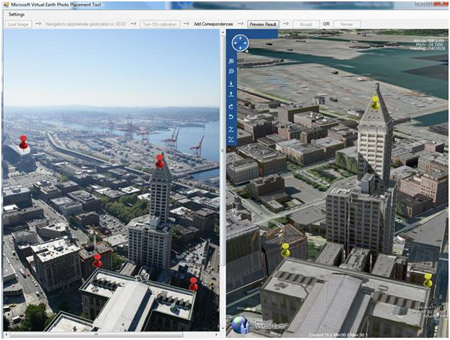 Golder performed a comprehensive field investigation and seismic site classification at the site of the Canadian Embassy in Port-au-Prince, Haiti. Even though the embassy was relatively new, it was damaged during the 2010 Haitian earthquake. […]