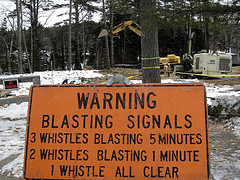 A blasting accident in Berryville Virginia involving West Virginia Drilling company Geological Technologies, Inc. is being investigated by the State Fire Marshal’s office. The blast, which occured on 4/20/07 (?) sent rock up to 1,200 ft away from the work site where GTI was preparing a foundation for a new structure. There were reportedly no warning sirens before the blast. No injuries were reported and damage estimates have not been released, but several businesses were damaged. (Photo by seaworthy)