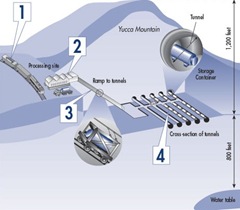 It’s been evident for a while that Yucca Mountain was history after it was announced that it’s funding was eliminated by President Obama. ENR is reporting that the USDOE is officially withdrawing its Nuclear Regulatory Commission application for a waste-storage facility although it sounds like they are a little unsure about how to do that. Reportedly, more than $38 billion has been spend on research and construction at the site over the last couple decades.  According to ENR, the temporary storage costs of storing spent nuclear fuel could reach $10 to $26 billion in the next 100 years if a permanent storage site is not found. It looks like we will be dealing with indefinite “temporary” storage of nuclear waste for probably our lifetime.

A pilot study is about to be undertaken by the Pacific Northwest National Laboratory to study the possibility of CO2 sequestration in deep basalt formations throughout the West and Northwest. The study will involve injecting 3,000 to 5,000 tons of liquid CO2 at a depth of between 3,000 and 4,000-ft. The team hopes that mineralization will gradually transform the CO2 and basalt into limestone. The total cost of the pilot study is approximately $10 million and is funded primarily by the U.S. Department of Energy.

ENR reports that a nuclear waste repository for spent nuclear fuel in Sweden could begin construction as early as 2016. The facility would consist of 50km of tunnels in granite bedrock up to 500-m deep. […]