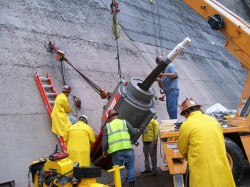 After 60 years, the design flood for the Bluestone dam changed requiring a modest raise and a number of other improvements totaling some $130 million thus far and another estimated $200 million in improvements still to go. Check out the size of these anchors being use to anchor the dam foundation into bedrock. This is just one of 150 anchors. The article also discussed how the rock strength parameters used to design the dam 60 years ago were developed using the state of the practice at the time, new rock strength parameters are lower using current design standards. [Source: The Charleston Gazette. Image: Charleston Gazette]

On December 14, 2005, the upper reservoir of the Taum Sauk pumped storage plant, a hydroelectric power plant in the Missouri Ozarks, suffered a catastrophic failure. The resulting flood severely damaged the Jonhson’s Shut-Ins State Park and swept away the park superintendent and his family. Fortunately all of them survived. (Photos by Federal Energy Regulatory Commission and USGS)

Last week, the Missouri Attorney General’s office announced a settlement of $180 million between the facility’s owner, Ameren Corp. The failure reportedly was a result of negligence on the part of the company. More details after the break.

Two dams breached in Midland County, Michigan, causing flooding and the evacuation of 10,000 local residents after days of heavy rains. The Edenville Dam and the Sanford Dam both experienced “catastrophic dam failures” affecting the […]