“We have worked with state Department of Transportation (DOT) agencies in almost all of the states for more than 65 years and have successfully designed hundreds of DOT infrastructure projects,” said MACTEC President/CEO Ann E. Massey. “Our track record speaks for itself. We believe that DelDOT is not following its own processes and procedures, nor has it reasonably considered the impacts of its own decisions. MACTEC looks forward to participating in a fair and impartial proceeding to resolve this matter.” 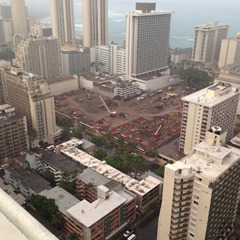 Hawthorne, NJ (July 7, 2016): The Deep Foundations Institute (DFI) is proud to announce that Hayward Baker is the 2016 Outstanding Project Award (OPA) winner for the design and construction of foundations at the International Market Place in Waikiki Beach, Honolulu, Hawaii.

The award will be presented at the DFI International Conference on Deep Foundations, Seepage Control and Remediation (41st Annual Conference) in New York City, October 12-15, 2016.

Opening in August 2016, the International Market Place, a well-known retail, dining and entertainment destination, has undergone a complete revitalization. Hayward Baker was the foundation contractor for the construction of a new 80,000 sq ft Saks Fifth Avenue anchor store, a 7-story parking garage and two 3-story retail structures located on a 6-acre site in a heavily congested area of Waikiki Beach. The company installed 544 micropiles to depths of up to 315 ft to support the structural loads. Difficult site geological conditions and cultural restrictions presented significant challenges for the design and construction of the foundations. The project site was located within the boundaries of an ancestral Hawaiian burial ground that required pre-excavation prior to any installation of below grade improvements. Additionally, two existing historic banyan trees on the site had to remain in place and not be trimmed for equipment access.

[Editor] Click through for the rest of the DFI Press Release. I’m proud to say that Hayward Baker is one of the sponsors of GeoPrac! Congrats to them on the award! [/Editor]

[Editor] Click through to read the rest of this press release. [/Editor]