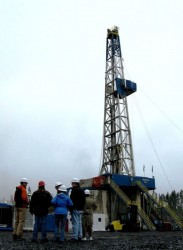 I kept the same title of the source article for my post…it is a very simple explanation of the enhanced geothermal systems or EGS process of extracting geothermal energy from hot, dry rocks…even if it is a little sensationalized. The AP article describes the well-funded Newberry Crater Geothermal project in Central Oregon. The project is being run by AltaRock Energy, Inc. of Seattle and Davenport Newberry Holdings LLC of Stamford, Conn. with $43 million in funding from the US Federal Government, Google and other investors.

The site is an inactive volcano that has not erupted since before the last ice age. There is plenty of heat available, but unlike conventional geothermal projects, there is no water in the formation and/or the rock is too impermeable for the fluid to flow. Enter the EGS technology, which involves something they are calling hydroshearing, where water is injected into the hot boreholes along with some kind of polymer particles (not sure of the size). The cold water contacting the hot rock causes fractures to form, and the polymer particles keep the cracks open allowing water to flow deeper into the formation and form additional cracks. Eventually the polymer melts away. This process is similar to the hydrofracking I’ve posted about recently, but the oil and gas industry uses sand to wedge the fractures open and there was no mention of chemicals in the EGS process.

One major concern with EGS and most geotehrmal projects is the possibility of induced seismicity, or man-made earthquakes, something that has been in the news a great deal recently. The testing will involve injecting water at a rate of 800 gallons per minute into a borehole 10,600 feet deep. The projected fractured area is from 6,000 to 11,000 feet below the ground surface in a radius of approximately 1,700 feet around the borehole. The extent of the fracturing and presumably the magnitude of any seismic activity will be monitored using a network of seismic sensors. [Source: Yahoo! Green (AP) via ASCE SmartBrief. Image: Newberry Geothermal]

October 19, 2010 rockman Available Resources Comments Off on New Mobile Exploration and Geothermal Drill Rig Reportedly Most Powerful of Its Kind

The Globe Drill GT3000 mobile drill rig takes about two semis to haul, but can drill holes as deep as some oil and gas rigs that take 40 or 50 semis to move. It has […]