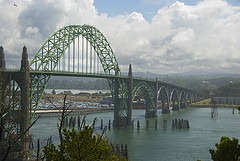 Geologic Hazards in Newport, Oregon will need to be disclosed to prospective property buyers, and the necessary geologic reports will need to be filed if a proposed City ordinance is adopted. But this will also require the property owner to sign a “Geologic Hazard Disclosure and Liability Waiver” form that would release the City from liability associated with the geologic hazards. The zones where this would be required are based on Oregon Department of Geology and Mines (DOGAMI) geologic hazard maps which have so called “red zones” which denote “active” and “high” hazard zones. These are primarily areas on the coast and the red zones are eroding as a rate of up to 1/3-ft per year. (Source: Newport News Times, Photo: Yaquina Bay Bridge, Newport, Oregon by kightp on Flickr.