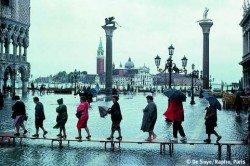 The landmark City of Venice, Italy is known for it’s world famous canals, architecture and for some…its flooding. Part of the problem has been blamed on ground subsidence from pumping of shallow ground water in the mid 1900’s. A massive project dubbed MOSE has been in progress for some time to build inflatable gates to stop high tides from flooding the Venice lagoon.

A recent paper in the Journal Water Resources Research evaluates the possibility of injecting water into the formations to stop and perhaps even reverse the subsidence. The article from Ars Technica (link below) mentions that the technique was used with some success in the Long Beach, California area. The study authors had no boreholes in the area, but were able to rely on a large volume of high-quality seismic data obtained by the Italian Government from oil companies. Their simulations involved 15 boreholes around the City of Venice pumping seawater continuously for 10 years. At that point, they authors concluded there is the potential to lift the city 25-30 cm. [Source: Ars technica via Geoengineer.org. Image: De Saye / Rapho via arlindo-correia.com]

This amazing video has been making its way around the geoblogosphere as well as the mainstream media. Pretty remarkable. It ranks up there with the Japanese Landslide Video.