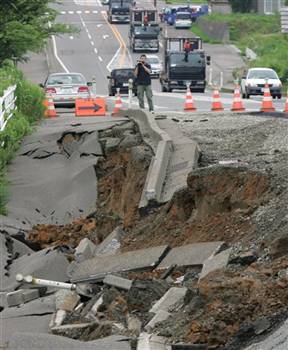 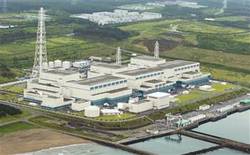 The nuclear plant experienced a small fire that officials said was contained and did not damage the reactor. Initial reports indicated a small amount of water, on the order of 1,200 liters, spilled from a tank and was flushed out to sea but did not pose any significant environmental risks. Subsequent to the initial reports on the fire and spill at the plant, information was released that 100 drums of low-level nuclear waste were knocked over during the quake, this number was later updated to 400 according to NPR, of those 400 the lids reportedly came off of 40 of them. The plant has not resumed operation in light of these safety concerns. (AP Photo)

A new dimension to the story is that the fault may continue underneath the facility itself. According to NPR:

Adding to the urgency was new data from aftershocks of the quake, suggesting a fault line may run underneath the mammoth power plant. Osamu Kamigaichi, an official at Japan’s Meteorological Agency, which monitors earthquakes, said it was possible the fault line stretched in the direction of the nuclear facility and may reach underneath its grounds. 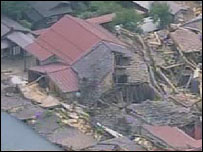 According to GMANews.tv, 13,000 people were evacuated, 60,000 homes were without water, 34,000 without gas, and 25,000 were without power. There was extensive damage to residential structures in the Town of Kashiwazaki. This can be attributed to the short period of this earthquake, approximately 2 to 3 seconds, as well as soft ground conditions in the central Kashiwazaki area (Daily Yomiuri Online). (BBC Photo)

Video coverage from a Japanese Station. Yep, it’s in Japanese, but you can see some good shaking video.

A magnitude 7 earthquake struck just 8 miles north of Anchorage, Alaska this morning causing widespread damage to buildings and infrastructure. The quake struck at 8:29 am local time and the focus of the earthquake […]