The area is approximately 300-m from the Rhine River, and groundwater is very shallow. As noted in another NCE article, the contractor constructed 15 dewatering wells when only 4 were approved. Additionally, the pumping rate being used was 750 m^3/hr, or nearly double the 450 m^3/hr it was pumping in December of 2008. Clearly the groundwater is one component of the failure, but it does not appear that there is sufficient evidence to say exactly what role of the groundwater was or if the shoring walls did in fact fail and lead to the collapse of the Cologne historical archives and the deaths of two people.

Not too many details here since I am not a subscriber to their magazine, but it does appear to be some much needed good news for the King County, WA (Seattle area) Brightwater treatment plant […]

The Most Important Fridge On Earth 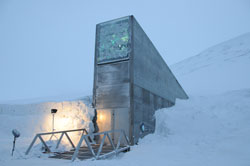 The City of Fort Collins (Colorado) recently completed construction of a tunnel underneath BNSF Railway tracks to connect more than 30 miles of trails.  The prospect of tunneling under an active rail line is a […]