While the centennial of the GCT is being celebrated, a new project is taking shape approximately 90 feet below the existing tracks.  The East Side Access project (ESA) will provide a new connection from the Long Island Rail Road (LIRR) to GCT.  This project will help alleviate the strain on Penn Station, as a study performed at the outset of the project indicated that a higher percentage of Penn Station subway riders actually worked closer to Grand Central.  To New Yorkers who are familiar with the geography of the area, I’m sure the following project description from Wikipedia makes sense, to me…it makes my head spin!  The map from the MTA is a bit easier to follow.

Extending between Sunnyside, Queens, and Grand Central, the project will route the LIRR from its Main Line through new track connections in Sunnyside Yard and through the lower level of the existing 63rd Street Tunnel under the East River. In Manhattan, a new tunnel will begin at the western end of the 63rd Street Tunnel at Second Avenue, curving south under Park Avenue and entering a new LIRR terminal beneath Grand Central.

The cost of the project is estimated to be in excess of $8 Billion with a completion date of 2019.  I’ve compiled a list of some interesting articles on Grand Central Terminal and the East Side Access Project.  At the bottom of this article is a list of some previous GeoPrac posts on the East Side Access Project and another mega project from the NY MTA, the Second Avenue Subway Project.  Enjoy!

Great Reading on GCT and the East Side Access Project 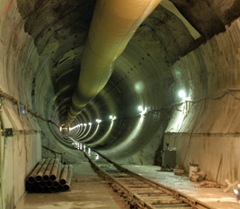